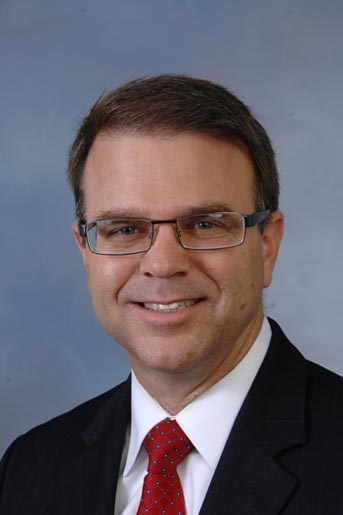 Rob was born in Stockton, California. He graduated in 1985, cum laude, from the University of Dallas with a BA, majoring in politics. In 1988, he was admitted to the Illinois bar after earning his law degree, and a master’s degree in political theory, both with honors, from Loyola University of Chicago. Prior to his civil experience, Rob served in the U.S. Marine Corps as a prosecutor and staff counsel. Since then, Rob has regularly practiced before Illinois State and Federal Courts, as well as in the Federal District Courts in Indiana and Wisconsin. He is one of the founding shareholders of Marwedel, Minichello & Reeb, P.C., established in 1997, a firm specializing in maritime and transportation law.

During his career, Rob has been active in various professional and service organizations, including the Propeller Club, Port of Chicago (President, 2000-2002); the Illinois State Bar Association; the Maritime Law Association of the United States (Proctor; Nominating Committee, 2010); the Transportation Lawyers Association; and the Intermodal Association of North America.

U.S. Specialty Ins. Co. v. Atlantic Biologicals Corp., 2020 U.S. Dist. LEXIS 128007 (S.D. Fla. 2020).  Obtained judgment following a bench trial in favor of marine insurance client in declaratory judgment action involving $2.2 million in claims for alleged damage to surgical implants, surgical tools and endoscopy equipment as a result of mold exposure following damage to the storage facilities in two separate hurricanes.  The Court sustained the denial of coverage on the grounds that the insured had not proven the goods were physically damaged by mold, nor had it proven that the goods were in good condition prior to the hurricane events.

Estates of Dunlap and Wade v. Gibson, et al., Circuit Court of Cook County, Docket Nos. 16 L 11548 and 16 L 11769.  Double fatality pleasure boating accident where client was operating speedboat and collided with breakwater on Lake Michigan.  We were successful in resolving the case for modest policy limits after trial commenced, and helped develop case against co-defendants regarding an inoperable navigational aid on the breakwater.  (August 2019)

Estate of Gleason v. Grana Trucking Company, et al., Circuit Court of Cook County, Docket No. 18 L 3453.  Fatality trucking accident in which we represented the property broker.  We were successful in resolving the case as to the broker for a very modest settlement. (June 2019).

Estate of Thomas v. Hapag-Lloyd (America), Inc., Circuit Court of Wayne County, MI., Docket No. 14-00306-NI. Triple fatality wrongful death action where the decedents were killed when a truck pulling an intermodal chassis and container owned by Hapag-Lloyd turned over in an intersection and crushed their car under the fully loaded container. We were successful in obtaining full defense and indemnity from the trucking company and its insurer for Hapag-Lloyd.

Estate of Mockus v. Mediterranean Shipping Company (USA) Inc. (MSC), Circuit Court of Cook County, IL, Docket No. 2014 L 007816. Wrongful death action where the decedent independent operator truck driver was killed when he rear-ended another truck while pulling an intermodal chassis and container owned and/or leased by MSC. Plaintiff voluntarily dismissed the suit after the inspection of the tractor and chassis clearly demonstrated that the accident was caused by the decedent driver’s error in failing to apply his brakes.

Estate of Williams v. C.H. Robinson, Circuit Court of Cook County, IL,Docket No. 2012 L 000155. Wrongful death action in which decent was killed when her vehicle was struck by a tractor trailer transporting a load which was brokered by C.H. Robinson. We were successful in obtaining full defense and indemnity for both John Deere and C.H. Robinson from the trucking company and its insurer.

In the Matter of RQM, LLC, U.S. District Court, Northern District of Illinois, Case No. 10 CV 05520. Plaintiff was injured when he fell from the second deck of a yacht, fracturing his neck and rendering him a quadriplegic. We represented the yacht owner and sought limitation o f liability under maritime law and procedure. The case was favorably settled for the yacht owner.

Kawasaki Kisen Kaisha, Ltd. v. Plano Molding Co., 696 F.3d 648 (7th Cir. 2012), holding that an ocean carrier has a right to contractual indemnity under NVOCC bill of lading against the consignee for damages caused by improper loading of container if the consignee directly contracted with the NVOCC or authorized the shipper to contract with NVOCC on the consignee’s behalf.

Riduco, SA v. A.P. Moller-Maersk A/S, 2009 WL 4680197, 2010 AMC 1 (N.D. Ill. 2009), holding that the Carmack Amendment did not apply to the inland rail segment of an international through shipment of cargo from the United States to Columbia, and granting summary judgment to client ocean carrier based on a one-year time bar contained in the ocean carrier’s through bill of lading.

FT&T Consulting, Inc. v. Cargowise EDI, Inc., 2009 WL 1904415 (N.D. Ill. 2009), In client’s claim against computer software supplier for software performance issues, software supplier sought arbitration under the parties’ maintenance and license agreement. The court denied the motion, finding that the only reasonable interpretation of the agreement was that disputes related to performance obligations were excluded from the arbitration clause.

Kawasaki Kisen Kaisha, Ltd. v. Plano Molding Co., 2008 WL 1883466 (N.D. Ill 2008), holding that client ocean carrier has a cause of action for negligence and breach of contract against a consignee as a “merchant” under the its bill of lading for damage sustained in a train derailment that is caused by improper packing and loading of a container.

David Michael Bunch v. Maersk Line Limited, Circuit Court of Cook County, Illinois, Docket No.: 03 L 14764. Four week jury trial, November 2005. Defended client, Maersk Line Limited, in a seaman’s claim under the Jones Act. Plaintiff fell nine feet, head first, into the hold of a containership while the ship was at sea off the coast of Chile. Plaintiff suffered numerous severe injuries including moderately severe traumatic brain injury, a cerebral contusion, ischemia in the right parietal and occipital lobes, and damage to the fifth cranial nerve; a right orbital fracture with optic nerve damage; paralysis of the right side of the face; damage to the right trigeminal nerve at the base of the brain; displaced Colles fracture of the l eft wrist with external nerve damage to the left arm; peripheral nerve injury; severely comminuted fracture of the left distal radius; left rotator c uff tear; carpal tunnel syndrome; cubital tunnel syndrome; comminuted impact fracture of the right elbow; and five right rib fractures. The demand prior to trial was $7,000,000, and the offer was $2,000,000. Plaintiff asked the jury to award in excess of $27,000,000. The jury returned a verdict in favor of plaintiff in the amount of $3,839,133, which was reduced by thirty percent (30%) for contributory negligence, resulting in a verdict in the amount of $2,687,393.10.

National Litigation and Collection Counsel for marchFIRST Consulting, Inc., f/k/a Whittman-Hart, 1999-2002. Provided national representation to marchFIRST Consulting, one of the largest technology consulting firms in the United States until its bankruptcy in 2001. Coordinated litigation in approximately 100 matters involving disputes over technology consulting and implementation, and collected over $13,000,000 on behalf of marchFIRST. Also represented marchFIRST in collection actions on behalf of the bankruptcy trustee.

Dead Sea Pericles v. American Commercial Barge Line Co., 2003 A.M.C 370 (N.D. Ind. 2002). Represented American Commercial Barge Line in relation to its liability as a carrier, and its losses as a barge owner , of nine, fully loaded barges which sank in Burns Harbor, Indiana, during a major storm on Lake Michigan. The court granted summary judgment in favor of ACBL against shipper of bulk commodities, holding that under the Harter Act, ACBL had completed its obligation of delivery under a contract of affreightment by making delivery to the marine terminal designated in the contract prior to the storm. ACBL’s claims against the marine terminal for the salvage expenses incurred in raising the barges, and for the hull losses, were settled in full, plus prejudgment interest, for $1,700,000 just prior to trial.

Spirit of Excellence v. Intercargo Ins. Co. , 777 N.E.2d 660 (Ill. App. 2002). Summary judgment in favor of marine insurer client upheld on appeal, where trial court held that exporter of multiple shipments of used cars to Russia had no insurable interest in the cargo at the time of loss.

Motorola v. Kuehne & Nagle, Inc., 171 F.Supp. 799 (N.D. Ill. 2001). Court granted partial summary judgment in favor of freight forwarder client, holding that the Warsaw Convention’s limitation of liability should be calculated based on the weight of the affected portion of the shipment, not on the entire shipment, unless the shipper can show that the value of the whole was damaged by the damage to the part.

Willis v. Transamerica Leasing, et al., Circuit Court of Cook County, Il., No. 98 L 3127 (1994-1999). Represented Transamerica Leasing in a multiple fatality accident involving a container chassis, in which six children tragically perished in a vehicle fire. The case was a major news event in Chicago, and ultimately was a catalyst for the investigation of the improper issuance of Commercial Driver’s Licenses in Illinois, and for change in the motor carrier safety regulations pertaining to the roadworthiness of intermodal equipment.

Kristel Corp. v. Fritz Companies, Inc., 1997 U.S. Dist. LEXIS 1952 (N.D. Ill. 1997).  Court granted partial summary judgment in favor of freight forwarder client, holding that the “packages” to be considered for purposed of the $500 package limitation under the Carriage of Goods by Sea Act were the total number of pallets indicated in the “Total” column on the Bill of Lading. Flint v. Court Appointed Special Advocates of Dupage County, Inc., 674 N.E.2d 831 (Ill. App. 1996). Court granted summary judgment in favor of not-for-profit client, in a suit brought by former employee, on the basis that an amendment to the employment agreement was not supported by consideration and was unenforceable.

Mid Europe Trade & Investment Company v. Canada Maritime, 1995 A.M.C. 2128 (N.D. Ill. 1995). Court granted summary judgment in favor of ocean carrier client on the basis that suit was not brought within 9 months of the date of loss, as required in a bill of lading not subject to the Carriage of Goods by Sea Act.

Independent Machinery v . Kuehne & Nagle, Inc., 867 F. Supp. 752 (N.D. Ill. 1994). Court granted summary judgment in favor of freight forwarder client, holding that its terms and conditions of service, proven through a course of dealings, established that the forwarder did not assume the obligations of a common carrier, and had no liability for physical damage to the cargo.

Speaker, “The Enforceability of Forum Selection Clauses in the United States under Maritime Law,” Marine Energy Symposium of the Americas 2018 (Toronto, Canada (April 2018)

“The Act of God Defense for Marine Terminals, Wharves and Warehouses,” The Transportation Lawyer, Vo. 19, No. 2 (October 2017).

The Act of God Defense for Marine TerMinals, Wharves and Warehouses